By the mid-1970s, Albania was a pretty bleak place; the poorest country in Europe, cut off from the rest of the world and governed by a strict form of ultra-Communism.  Enver Hoxha, the increasingly paranoid dictator who ruled Tirana for 40 years until his death in 1985, created a deeply repressive regime which attempted to control all aspects of everyday life as well as fostering an all-encompassing cult of personality around himself. Hoxha’s only foreign friend was Maoist China, who alongside Albania, viewed themselves as the only REAL communists left – the Soviets had gone all wishy-washy and soft towards the West as far as they were concerned. China and Albania, until Mao’s death, were united in a weird isolationist alliance in which two maniacal despots kept their people cut off from the rest of the world, bombarded them with ridiculous propaganda and consigned them to dire poverty for decades.

According to this fascinating English language history of Albanian photography by Qerim Vrioni (pages 5-24), the regime, in common with most other Communist regimes who fully appreciated the  power of the image in the moulding of minds and attitudes, developed photography as a propaganda tool soon after assuming power in 1945. This would appear to have followed the model adopted during the early stages of Stalin’s assumption of power, with photographers being encouraged to produce unambiguous work that concentrated on specified ideological themes that showed the better future under construction. Individual creativity appears not to have been encouraged. The isolation of Albania from the rest of Eastern Europe after Stalin’s death also affected the development of photography and it would appear that from the 1960s onwards, Albanian photographers turned inward and didn’t participate in international competitions.

However, as if to compensate for this self-imposed quarantine, rather than being subsumed into the collective propaganda effort, photographers now began to be credited for their individual work, which, according to Vrioni, served to invigorate photographic practice. However, the first national Albanian photographic exhibition only took place in 1974, indicating a degree of stagnation which is far beyond what occurred in the Soviet Union or East Germany during this period. 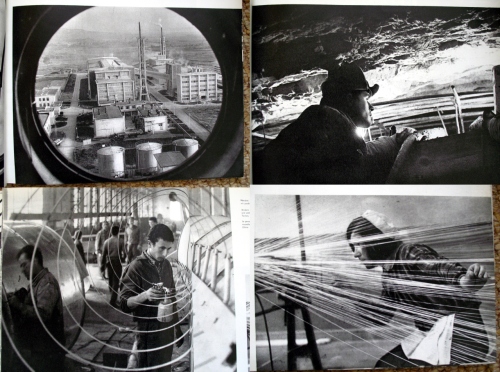 1976, the same year this book was published, saw the death of Mao, which deprived Hoxha of his sole supporter and ally. Just like Khrushchev when Stalin died, the Chinese soon began to dismantle Mao’s strict ideology and implement reforms, whilst paying lip-service to the dear departed leader. Fearful of the same happening to him, Hoxha pumped up the rhetoric and tightened the leash within Albania. Bellicose assertions of self-reliance accompanied by purges did little to paper over the cracks that were now appearing in a stagnant economy deprived of even limited foreign support. Increased repression and paranoia now reigned supreme.

Photography under this repressive regime was tightly controlled and not at all widespread.  This is all the more interesting as Albanian photography prior to the communist takeover after World War 2 appears to have been relatively well developed and sophisticated, certainly in the main urban centres, with a long history going back to the 1850s.  Indeed, apparently the regime was so aware of the power of photography, and it’s potential to disrupt the mythical re-creation of history, that they were careful to confiscate personal photographs from those they considered enemies which were deposited in a secret government archive. (see: Albania A Photographic Journey 1858-1945 by Chauvin and Raby) There seems to be some dispute about the exact legal status of amateur photography or if it was permissible to develop your own pictures from 1966 onwards when there was a crackdown on such bourgeois activities (it appears that your roll of  film might have to go to a state run lab for processing and the secret police examined your pictures for evidence of subversive thought), but it certainly appears that amateur practice was ‘discouraged’ to say the least. If you had a bad ‘biography’ or were under scrutiny from the secret police somehow, photography was a great way to draw attention to yourself; spies have cameras – you have a camera – therefore you must be a spy. With the progressive isolation of the country following the split with China the availability of cameras, film and darkroom equipment, which all had to be imported from abroad, grew more and more scarce making amateur photography a very unusual activity for the average unconnected citizen. Most personal photographs produced during this period appear to have come from official state employed photographers who were present at approved scenic sites, available to document weddings and make identity portraits for official documents. How you posed for a photograph was also a matter of ideological concern; facing the camera was safely proletarian. To do otherwise indicated dangerous bourgeois tendencies. (This material about amateur and family photography in Albania comes from this article by Gilles de Rapper and Anouck Durand.)

Turning now to this softcover book which was published in 1976, which is presented as a series of artistic images produced by the photographer Niko Xhufka. (By the way, as I’m using it a lot, the Albanian XH is pronounced like a J in English). Information about Xhufka is hard to come by (if anybody knows anything more please let me know) but he appears to have been a photojournalist primarily working for the official Party newspaper Zeri-i-Popullit.  As well as being a member of the official Writers and Artist’s Union, the brief biography on the dust jacket also states that he has won certain unspecified prizes and had at least 4 local and national exhibitions (any information out there about this greatly appreciated). From this information and the fact that this book was published by the official 8 Nentori state publishing house, it’s fair to assume that Xhufka was an establishment figure and not part of some avant-garde fringe group pushing the boundaries.

Even though these are presented as artistic images they clearly serve a political agenda and this is reinforced by the one page introduction which is a bombastic assertion of devotion to the glorious leader and the wonderful society he has created. The text and captions are in Albanian, English and French, indicating that it was designed for the (albeit limited) audience of bemused foreign tourists and the deluded members of Maoist/Stalinist fan-clubs who could be found in many a Western European and American university campus during the 60s and 70s.

This monograph is more of a ‘greatest hits’ collection rather then the rhythm it claims to be. It consists of singular images roughly divided up into various themes and there is no serious attempt to build a narrative structure other than presenting the crude message that Albania under Hoxha is a land of bliss. We have the usual broad categorisation of images into heavy industry, bountiful agriculture, stern looking soldiers, smiling children, peasants in traditional costume and the natural beauty of the countryside. The ideological message is reinforced through the captions which present Xhufka’s images as proof of the bountiful present and the happy future Albania has under the wise and benevolent guidance of the Party and the leader. The smiling leader only appears once in the book, accompanied by a happy schoolkid, which in the context of 1970s Albania is interesting in itself; art photography for a foreign audience apparently gave you licence to downplay the cult of personality somewhat.

Officially sponsored books and magazines glorifying such regimes usually like to play it safe; their audience is a wide one and they don’t want to make people think about things. In fact political propaganda is designed specifically not to make people think. The ideal is to have an audience of sponges who will believe everything that is said or shown to them.  Censors like to understand what it is they are passing and artistic images, which might or might not be critical of the regime somehow, could land you in a lot of trouble if they later turned out to contain some sort of subversive subtext that you didn’t understand. That is why repressive regimes have such a limited visual repertoire; the censor’s survival creed is to keep it simple. However in Xhufka’s case, I would imagine they didn’t have to worry; there is nothing here that was going to cause any sleepless nights.

A great deal of the book is made up of photographs that are straightforward depictions of officially sanctioned themes of the like we see again and again in official propaganda publications. Portraits of predominantly male industrial workers and female farm workers present us with the traditional heroic concept of collective labour in the service of the greater good that is a integral part of  of communist propaganda the world over. In a similar vein, the other main group depicted are schoolkids accompanied by hackneyed ‘children-are-our-future’ captions which serve to conceal the rather grim reality of a future under ‘uncle Enver’.  However, images of  military hardware and determined looking men with machine guns soon disrupt the cloying idea that what we are looking at it some sort of Disneyesque theme park; scary violence rules the roost.  Such photographs are the formulaic stuff of commie photobooks and we have seen them all many times before.

However, because Xhufka is presented as an artist rather than a mere propagandist, he is allowed a little more leeway in this work. The abstract aerial images of terraced fields and farmland are a point in case, as is the image captioned ‘The Dance of Cobbles’ of the steps in Gjirokastër (see photograph below). Although not particularly exciting from today’s perspective, for a repressive regime like Hoxha’s Albania that viewed all photography with suspicion, I would imagine that this would have been cutting edge stuff.  These images are reminiscent in some ways to Rodchenko’s work of the 1920-30s, when he experimented with different viewpoints to try to produce a new visual language in keeping with the promises of a new society being created.  For Rodchenko and his followers this period was a very brief interlude before Stalin and his cronies stopped all experimentation and brutally enforced straightforward Socialist-Realist depictions of approved subjects. 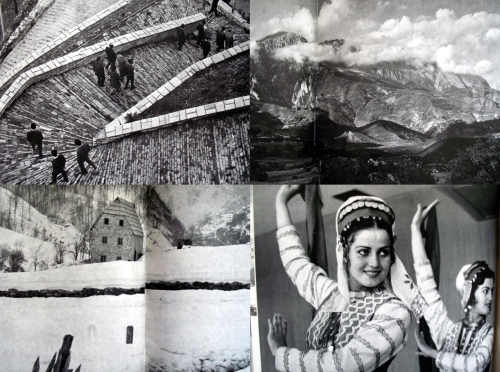 It is interesting that what we are seeing here is the same process in reverse; over time, despite its increasing paranoia, the regime permits a limited degree of creativity from safe individuals who are part of the system. In return for absolute loyalty, their creativity is then both tolerated and even glorified to a certain extent while being used to press home the message that all is well under socialism. By contrast, amateur photography is increasingly regarded as a suspicious activity undertaken by subversives and foreign spies lurking unseen within the population. All photographs not subject to state control were seen as a source of potential threat to the regime. Images which might contradict the official narrative of the Albanian state, as increasing paranoia set in, became more and more dangerous and measures were taken to control and restrict photography.  Xhufka, whose loyalty could be depended upon, was permitted to produce images whose aesthetic qualities would, if taken by another person, be regarded with a great deal of suspicion by the authorities. 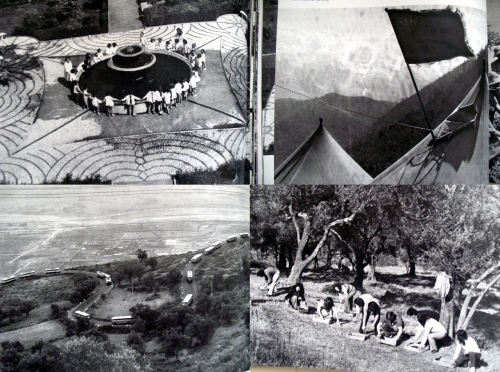 To my mind, by allowing Xhufka to take credit for his work this signals an ever so slight change in how the regime wanted to be seen by the outside world. No longer an anonymous member of the collective, Xhufka’s images are presented as an exemplar of Albanian art and creativity.  These images then are what the official regime regarded and defined as worthy of the status of art.  By permitting and encouraging his individuality, the regime is elevating and privileging him as a shining example of what could be attained under their guidance and his images reflect this. For a select few, individuality was permissible as long as they knew their place; for everybody else it was much safer to keep a low profile. 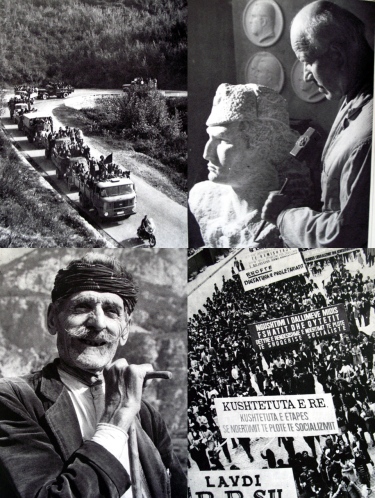