As the world edged towards war in the later part of the 1930s, new found alliances were formed between various ambitious powers that had designs on reshaping the world and the Axis countries set about propagandising the virtues of their new found friends. Japan, ruled by a military clique since the early 1930s with a figurehead emperor providing popular legitimacy, decided it wanted part of the action and had already invaded Manchuria during this period (after grabbing Korea earlier in the century) and staked its claims in Asia. For European fascist regimes it was important that propaganda differentiated their new Asian ally (racially, culturally and historically) from other societies in the region, demonstrated that Japan shared certain core values that were compatible with fascism, and generally presented them in a favourable light in the face of outside criticism.

First published in 1937 (this is the 2nd paperback edition missing the dust jacket) Gross-Japan (Greater Japan) is a photobook in the standard country survey style, that uses the time honoured formula to create a picturesque vision of  an exotic land for a distant audience. Here, ancient traditions coexist with the modern world, while historical buildings and unchanging scenes of Arcadian tranquility provide contrast for the progressive new developments and images of industrial might that will lead to a brighter future. Military prowess and images of a disciplined, ordered society show strength of purpose and convery a sense of national destiny that particularly resonated during this time. Looked at from this perspective, this book is quite unremarkable from a wide range of  similar 1930s propaganda publications but what is particularly interesting, from my point of view, is the author, Yônosuke Natori.

Although early Japanese documentary photographers, such as Ken Domon and Ihei Kimura are well known, Natori’s legacy has gone largely unremarked (at least outside Japan). Born in 1910, Natori left for Germany in 1928 where he studied in Munich before starting work as a jobbing photojournalist in 1931. Returning to Japan in 1933 he founded the group Nippon Kobo which is credited with influencing the development of Japanese documentary practice. Thanks to Natori’s exposure to photographic developments in Germany, where he would have undoubtedly become aware of the New Vision techniques that were then in vogue, as well as his adoption of the small format Leica camera, Natori can be regarded as a bridge between East and West, bringing the latest European developments to a Japanese photographic audience who in turn adapted them to their own particular cultural viewpoints.  As well as working with the German Ullstein press machine, Natori was the first Asian photographer to have his work appear in Life magazine (his work appeared in two issues of Life in 1937; an extensive spread on Vermont appeared on 19 July followed by pictures of the Japanese invasion of China on 20 December) before helping establish the propaganda magazine Nippon, also designed for a foreign audience, in 1934

Natori’s use of the Leica and the influence of the new vision style is evident in a number of the images within the book; the neat, ordered lines of prams and rickshaws he depicts upon the streets, Natori’s view through the wheels of the rickshaw in the financial area of Tokyo and the images of massed ranks of military recruits and schoolchildren practicing their martial skills stand out as particularly good examples of the new vision aesthetic applied to Japanese subject matter. These images introduce a dynamic tone the book which, as well as preventing it from becoming another coffee table tome, serves to move the narrative forward as well as informing the viewer that Imperial Japan is on the march.

Like other photographic surveys of distant lands, where the viewer is presented with a vision of the exotic-picturesque designed to emphasise the cultural and national specificity of the country in question, Natori’s book is filled with images that could have come straight out of a 1930s tourist brochure. However, like Nippon magazine, Gross-Japan was clearly designed as a piece of propaganda to disseminate Japanese cultural and national achievements to a foreign audience, in this case Nazi Germany. Undoubtedly assisted by the close contacts Natori had with the German press and his association with Japanese officialdom (the ambassador has written the forward to the book) this book was carefully tailored to present a vision of Japan that would appeal to a heavily politicised audience gearing up for war.

In the specific context and time it appeared, Gross-Japan had a specific political function to serve; it was important that the book not over emphasise the differences between the two countries. The German viewer had to be able to admire the traditional ceremonial and ritual aspects of Japanese culture whilst also being able to appreciate and identify with the disciplined social structure and values that are also presented as an integral part of Imperial Japan. In this way the two aspects are interlinked; present day strength is presented as a function of a long and deep historical tradition, which in turn serves to bolster expansionist claims over other countries and peoples. Concepts of social unity, discipline, a strong work ethic, industrial development, the veneration of tradition in the face of outside forces and a sense of national destiny would have struck a chord with the German viewer of the time. 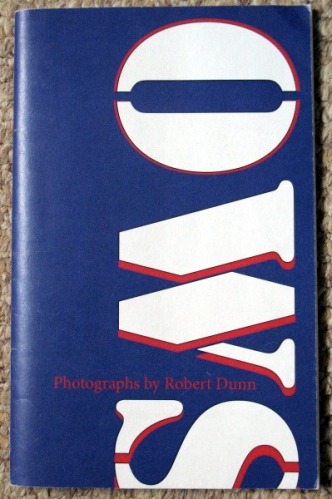 Simply entitled OWS, this photobook explores the ongoing fallout from the continuing economic crisis that dominates everyday life and politics throughout the world. A small, softcover book of photographs without text published by Coral Press Arts, OWS is a personal reaction to the 2011 Occupy Movement in New York. (For other publications and my thoughts on the Occupy Movement have a look at this previous post.)  Responding to contemporary political issues can be a tricky business for photographers, particularly in the case of popular demonstrations, as it’s very easy to fall into the trap of solely concentrating on drama (after all that is what we see in the media.) Dramatic confrontations with authority are the bread and butter of much media coverage of protest because they seem to condense the entire event into a single image which the average news ‘consumer’ can easily understand. (Such images also have the effect of presenting protest as an ‘abnormal’ activity carried out by people who may be a potential threat to the ‘normal’ middle-class individual whose vote holds the balance of political power. This makes it easier to dismiss the issues and concerns raised as being inconsequential.) Of course, this is not to say that dramatic things never happen in protests (they often do) but they tend to be overrepresented within media coverage. There is an inclination to reduce everything into a decisive moment that provides a short hand depiction of what are, in reality, multilayered and nuanced events. But this media formula works because it’s easy, fits the pre-packaged news-event formula, suits short-term rolling news cycles and the audience has, to a large extent, already been conditioned to expect such imagery whenever an event is discussed.

Unlike other photographers responding to the various Occupy encampments, (such as Mathieu Asselin and Ben Roberts) Dunn adopts the classic street photography aesthetic in his depiction of the people congregating in New York’s Zuccotti Park.  The fact that Dunn experienced the student protests in Berkley during the 1960s, undoubtedly a formative experience for many of that generation, informs how he responds to the presence of the first serious mass public protest movement in America since then. Of course student protest in the US since then has been blunted thanks to the restructuring of universities and degrees, turning them into courses that usually avoid critical thinking and impose massive debts upon students, which makes them fearful of upsetting the status quo.  The education system results in a conveyor belt of indebted young people entering the corporate workplace who will do what they’re told, when they’re told, and can be relied upon not to rock the boat.

Dunn’s images are quietly observed slices of time of everyday life within the protest camp; a man sweeping the street, somebody writing a placard, details such as tents and tarpaulins with protestors huddled within them, as well as images of other people sitting and sleeping within the park (the main occupations of a sedentary protest). While a few images show drums being banged and banners and flags being held aloft the usual visual signifiers of protest are muted and subsumed into a broader narrative of long-term, determined calls for change. This was after all not a simple street protest but a long term occupation. One image in particular, a bearded man, arms outstretched, with a Bank of America sign behind him, is an icon of non-violent political action in the face of power.  Another recurring theme is the presence of that American icon, the Stars and Stripes, which is represented through the predominance of red, white and blue within many of the images (as well as the flag itself) that serves to assign the values and ideals of the American dream to the protestors.  They are the hope for the future in contrast to the corruption and ineptitude of the financial-corporate-political clique that has hijacked the dream and twisted it into a nightmare for so many.

OWS is not a dispassionate portrayal of the Occupy Movement; Dunn sees it as a signifier of the rekindling of ideals and values that had been subsumed beneath the tawdry trappings of consumerism and greed for decades. His images clearly respond to this empathy he feels for the protestors cause and this has resulted in a small book that has a resonance with the past whilst engaging with current events. For many decades the idea that greed was good (to borrow a line from Wall Street) went largely unchallenged; now that the foundations upon which we organise our society have been shaken to the core, a (brief) opportunity arises for alternatives to the status quo to be explored. While the Occupy Movement failed to bring about change, it did lay down a marker to the great and good that their policies are under scrutiny like never before. What will be the lasting legacy of the Occupy Movement?  Nobody knows at present. We shall see. 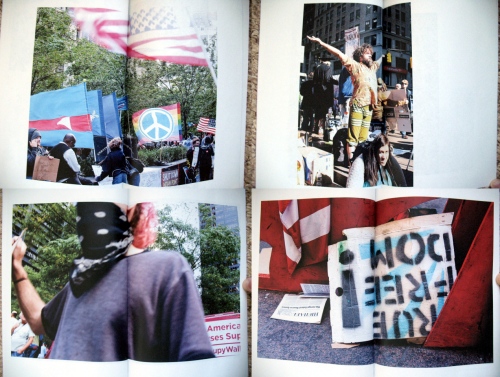