As listmania has gripped the photobook world once again, here are my personal top ten politically themed photobooks published in 2012 (listed by author).

A dark Dorésque homage to a metropolis trapped by its imperial past.

Bourdieu’s early photographs made while he was a soldier in the French army combined with his theoretical musings on the nature of photography, social inquiry and ethnography.

This has been one of the stars of this year – rotting concrete bunkers as metaphor for a regime based upon paranoia and fear.

An excellent book that ties all the strands of the global heroin trade together with strong images supported by an incisive text.

A very strong book that examines themes of immigration, exploitation, economic inequality and their impact upon an individual trapped in a system that perpetuates it.

An extensive and multi-layered exploration of the ongoing Fukushima crisis.

A very strong self published book that explores the layers of social trauma in the Democratic Republic of Congo.

Photographs of a dictator that serve to both fascinate and repel.

Down These Mean Streets – Will Steacy

Another book that has made it on to a number of lists – a hard hitting personal indictment on the ongoing collapse of the American dream.

A very welcome reprint from Steidl of a classic 1940s Swiss industrial photo book from a great photographer.

As any reader of the blog knows I’ve been interested in discussing photography surrounding the recent Occupy Movement. As such, I’d be more than happy to post links to photographers work on this issue. So if you do have some work you’d like to share then send me an email with a link to your website.

Shaun Hines work is an extensive and long running documentation of the Occupy London encampment which captures the different layers and issues surrounding the protest, including the attempts at removing the camp from the precincts of St Paul’s Cathederal. 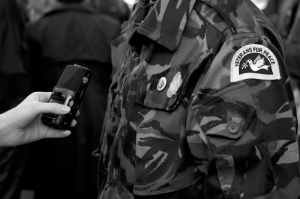 His second body of work, ‘The Signs of That Time‘ documents the various placards and signs that accompanied the Occupy London protest.