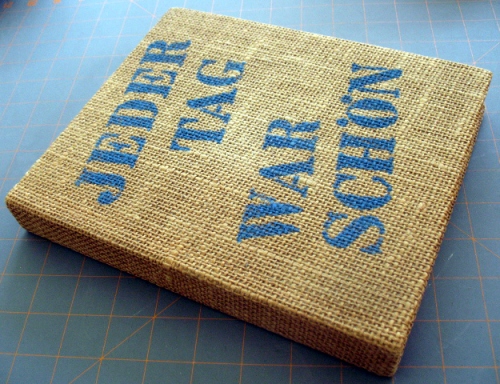 Annelie and Andrew Thorndike were a husband and wife team of filmmakers who produced a number of documentaries for the East German DEFA company during the 1960s and 70s. True-believers, the pair produced numerous uncritical documentary films that whitewashed the repressive nature of the East German regime and “proved” the superiority of communism (such as Das russische Wunder [The Russian Wonder] and Die alte neue Welt [The Old New World] – this film sought to prove that communism was the ultimate evolutionary outcome for humankind). As committed and trusted members of the East German cultural elite, the pair appears to have lived a relatively privileged life in return for producing propaganda films that toed the ideological line. 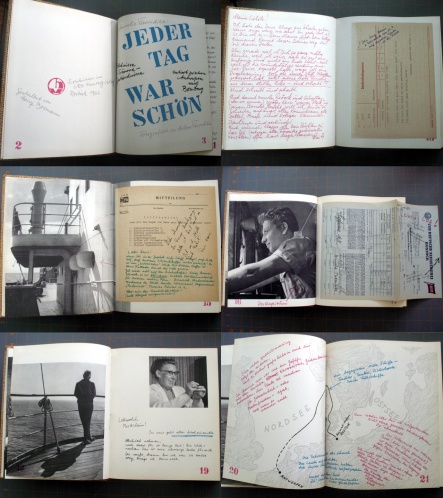 This book, published in 1966 by Hinstorff of Rostock, is a collaboration between the two filmmakers (Andrew provided the pictures and Annelie the text). On the surface, its a straightforward pictorial travelogue of a journey by ship from Antwerp to Bombay with images and text narrating their experiences. Much of the content would not appear remiss in any such travelogue – anecdotes and observations on the exotic sights and people they encounter as they journey from Europe to Asia. But it is impossible to divorce this book from the broader political and ideological context in which it appeared. 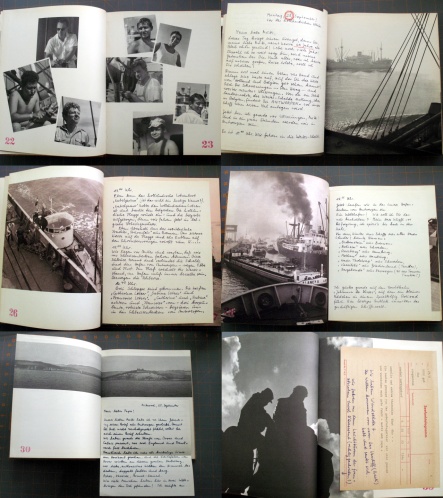 As they spend nearly all of their time on board ship, a lot of their focus is on the ship’s crew and their routine, which they observe as privileged outsiders. There is a moment of darkness in the book when a crew-member commits suicide and disappears overboard in the middle of the night causing a frantic search for him. But even this tragedy is presented in an ideologically “correct” manner so as to minimise any disruption to the narrative. (The unnamed crewman is described as introverted, a bit of a loner and not really a full part of the group. This has the effect of emphasising the inherent instability and self-destructive nature of bourgeois selfishness in contrast to the strength of the collective under communism.) 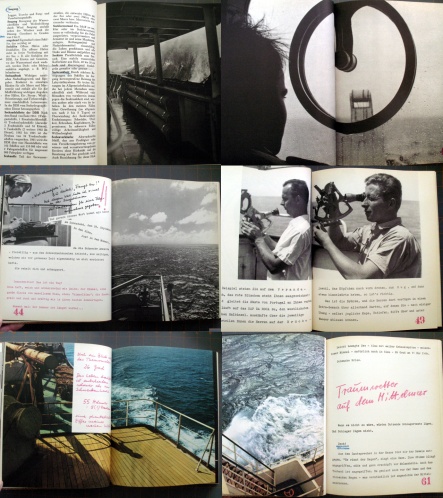 This ideological edge pervades this travel narrative.  As well as a bizarre love-letter to the DDR on the anniversary of its foundation, Cold War anxieties are always close to the surface and the NATO warmongers are decried for their meddling in the Mediterranean. Picking up a cargo of cotton in Sudan, the country is presented as an example of progressive de-colonization where the presence of a left-wing political grouping pressing for change meant the potential for a better future existed. In contrast, once they reach Pakistan and India the vestiges of colonial rule and the continuing exploitation of the poor are heavily emphasised. The inequitable nature of capitalism in these former colonies (without left wing groups to fight for the poor) is expressed in photographs of poverty, beggars, porters and a photographic montage of signs that all demonstrate that, in spite of their independence, these countries remain in thrall to their former colonial rulers.

The photographs are a mixture of documentary images and picturesque travel pictures that are both visually appealing and serve to progress the book narrative at a nice pace. Black and white is used for much of the early part of their journey, but once they pass through the Suez canal then a lot more colour appears. This emphasises the Orientalist exoticism of these faraway lands for the viewer. Individually, some of these photographs are quite strong. But this is an example where book design can transform a fairly routine subject into something a lot more interesting. With its jute cover, different font styles, facsimile handwritten captions and the tipped in ephemera (telegrams, letters, tickets) the book does successfully manage to recreate the feel of a handmade travel journal and engage the reader’s interest. It’s a surprisingly creative and self-expressive publication in the context of 1960s East Germany. 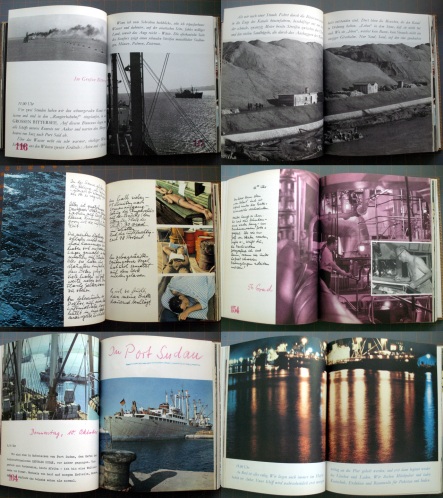 But there is an inherent contradiction at the heart of this book. East Germany by this time was a failed state, propped up by coercion and paranoia. The fact that so many of its citizens were voting with their feet and attempting to leave the country necessitated the building of increasingly elaborate (and deadly) barriers to keep them in. By contrast, the Thorndikes are shown revelling in the freedom and advantages bestowed upon them by the same state that was viciously preventing its own population from leaving. While they pay lip-service to communist ideology in their text, a distinct sense of self-indulgence and privilege pervades the book. It clearly demonstrates to the East German reader the rewards the regime could bestow upon those who were loyal. 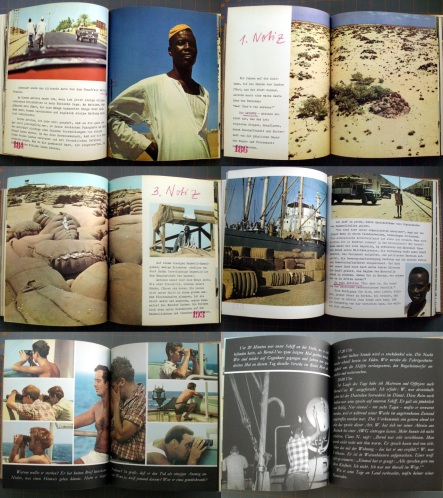 While the Thorndikes voyage on board a cargo ship and not some luxury cruise-liner, they still remain passengers, isolated from the crew and exempt from the labour they valorise so much. But even this token gesture is dispensed with at the end when they are transformed into minor celebrities and whisked away to film premiere’s and the demanding social circuit that have to be endured by these socialist VIPs. (One of the last spreads in the book is of Annelie gazing into a shop window while a pasted notice on the facing page lists her demanding round of interviews, lunch meetings and embassy receptions for the day.) 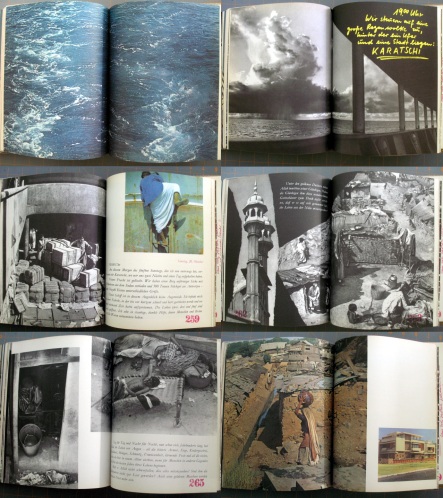 But this book clearly shows the disparity between the rulers and the ruled in this society.  Imagine being an average DDR citizen, trapped in a life of drudgery in the chemical factory or the collective farm, watched over constantly by an increasingly paranoid and repressive state, and subject to being shot should you stray too close to the border. Then you encounter this book. In that context, reading about the Thorndikes swanning around the globe telling you that Every Day Was Beautiful (outside East Germany) must have been a hard message to stomach. 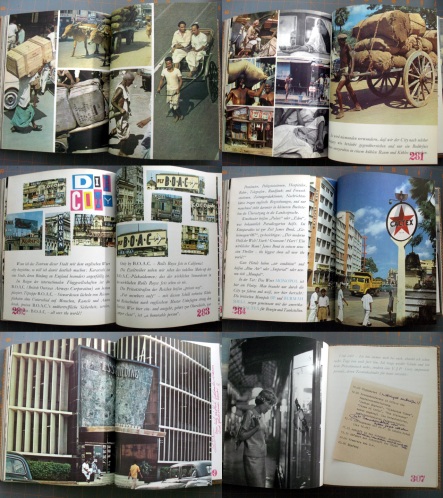