The abrupt collapse of the Soviet Union in the early 1990s meant that suddenly a number of new, supposedly independent, states emerged blinking into a changed world. While ostensibly free to plough their own furrows, these former satellite states are still shackled by the legacy of more than 70 years of centralised planning where local realities were ignored in the decisions made in distant Moscow.

Ukraine, with its agriculture and heavy industry, was a key component in this centralised economic system and was heavily dependent on energy inputs from other parts of the former Soviet Union in order to keep the production rolling. Perhaps the most enduring legacy of those times can be found in Chernobyl, whose crumbling concrete sarcophagus still lurks ominously in northern Ukraine, continuing to invisibly poison the environment and devastate countless lives.

Unlike other newly independent states in the post-Soviet zone, Ukraine has had a long and proud national tradition which has helped to bind the country into a largely cohesive entity (unlike its neighbour Belarus which is effectively a Russian satrap). Preoccupied with dealing with the economic and social trauma of the break-up, Russia was in no position to assert much influence over its new neighbours allowing many to build ties with former Western enemies, such as Nato, a strategy which was designed to prevent future Russian interference.  While many of the former post-Soviet countries are regarded as being distinctly different, Russia considers both Belarus and Ukraine as Slavic brothers who most assuredly fall within their zone of influence.

Looking hopefully to the West while the weight of the past pulls them to the East, the ties that bind this new nation together are being slowly unravelled by competing powers. Politically, economically and socially Ukraine is defined by this struggle. In this conflict, energy, the vital motive force behind a society, becomes a weapon. The pipelines that were laid in Soviet times are crucial conduits of gas and oil that are key to keeping Ukraine working and the Russians have been more than happy to threaten that they would turn off the tap if they didn’t get their way. Additionally, as much of the natural gas that flows from Russia to Europe runs through Ukraine, an additional layer of pressure is added to any events that might jeopardise the EU economy.

Erken’s photographs are a portrait of a country struggling to come to terms with its new and uncertain place in the world. His images produce an account that ties together the varying strands of this invisible geopolitical tug of war and  its impact upon both ordinary individuals and Ukrainian society.  Moving seamlessly between scenes of industry, apartment blocks, coal mines, power stations, desolate landscapes, and everyday people sleeping and drinking, Erken creates a narrative that is refreshingly broad and ambitious in its scope.

The landscape in these images is bleak and heavily polluted; this is a country where the environment has been ravaged by man for decades. Interestingly, the few images of lush greenery and the bright red berries that appear in the book are pictures from the deserted and heavily contaminated zone around Chernobyl.  The promise of the future has been tainted by the legacy of the past.

As a book object this is a wonderfully produced example of what can be done through self publishing. It comes complete with cardboard sleeve which has a small black and white image of a Soviet era dam under construction on the front. Sliding the soft cover book out, there are a number of translucent pages before you get to the book proper. The sequencing and the narrative flow of the images works well, while the deliberate use of different sized pages prevents it from becoming yet another oppressive survey of despair. Despair is most assuredly evident in this work but it is the quiet scream of mute anger and individual powerlessness rather than the shrill cry of the outsiders fleeting outrage that pervades the pages of this book. 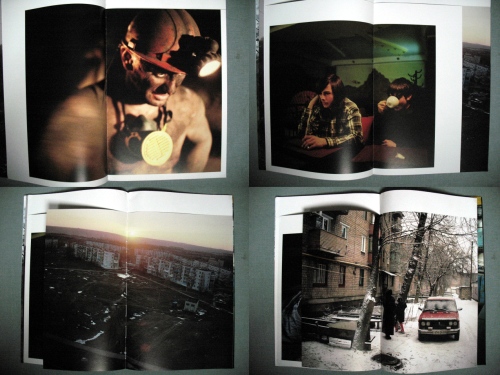 Erken’s work is an examination of the human impact of this posturing, portraying an uncertain nation, shackled by history, trapped between their aspirations and the inescapable influence of their larger neighbour who is determined to reassert control.  Unlike other photographic projects documenting the Soviet legacy this is not just another study of rust and squalor; the clichéd gnomic semi-naked alcoholics of Boris Mikhailov are absent here.  Erken’s images are subtle and, in my opinion, all the more effective because of it.